The organization empowers 50,000 volunteers, partners with 304 agencies, and has served more than one million children. They provide children from birth to age twelve living in low income and homeless situations with the essential items they need to thrive, at home, at work, and at play. They supply the items free of charge by engaging and connecting communities that have with the communities that need in Boston, Philadelphia, and Chicago. They are Cradles to Crayons and the visionary behind the organization is Lynn Margherio. In 2000, during a Christmas break from her job working on the HIV/AIDS initiative with the Clinton administration, Margherio was visiting her brother and sister in Michigan when she came up with an idea. It was while playing with her niece that she noticed that she was quickly outgrowing her toys and clothing faster than she could use them. Her little niece’s room was filled with barely used toys she was bored of and clothes she had outgrown that still appeared new. This got her to thinking about the millions of households around the country with clothing and toys that were no longer being used in stark contrast to the millions of homes where children were in desperate need of these very same essentials. Margherio came up with an idea to connect the haves with the needs within the community. With this in mind, she started going about collecting toys and clothing and disseminating them to organizations servicing people in need. In 2002, she officially launched Cradles to Crayons, and eventually made it her full time mission to connect communities that have with communities that need. I recently spent a morning touring the Cradles to Crayons Brighton, Massachusetts facility with Lynn Margherio where I learned what it takes to create a movement that has helped more than one million children by providing clothing, toys, books, and school supplies since 2002. Here is Lynn Margherio, founder, visionary, and change warrior at Cradles to Crayons:

Driven by Need and Vision: More than 305,000 Massachusetts children 12 years old and younger live in low-income or poverty-stricken households. In any given year, more than 100,000 Massachusetts children will experience homelessness. Meanwhile, according to the U.S. Census Bureau, Philadelphia has the highest poverty rate among the nation’s ten largest cities. Nearly one in four Philadelphians, including 130,000 children, live in poverty. In Chicago, 59% of children, 345,000, live in low income, poverty, or homeless situations. Margherio says that the overwhelming need is what drives her and almost every volunteer that comes through their doors. When people see the Cradles to Crayons Giving Factory, a massive warehouse divided up by clothing, toys, books, and school supplies, with a sophisticated UPC tracking system to make sure that every child’s wish list is filled, they quickly understand that it’s possible to make a difference. Margherio says that sometimes people are hesitant to give money or donations to a non-profit because they are unsure where it all goes. With Cradles to Crayons, she says anyone can come here for a tour or to volunteer for a day and what they will witness is hundreds of packages going out each day to fill the needs of children around the community. Margherio says that on her most challenging days, she simply walks through the Giving Factory to get a renewed burst of energy from so many smiling volunteers focused on helping kids, and is reminded of the immense power of giving back.

Great Systems: Perhaps it is from her previous career as a business strategy consultant that Margherio realized early on that her ability to create the greatest impact would be a byproduct of great systems. She says that the original orders that came in via fax were barely legible. As the requests snowballed, she and her team quickly realized that strong systems would need to be put in place in order to scale quickly. Now all KidPack requests are put into their system and color coded labels are printed with the child’s name, the date of the request and the referring organization. This makes it easy for volunteers to fill the orders. Furthermore, the Giving Factory has been systematized into sections (clothing, toys, books, school supplies), with each section further divided by age, sex, and clothing sizes, so that any volunteer can quickly find his way around the warehouse to fill an order. Margherio also put systems into place for sorting donations that come through their doors. They have high quality standards for all of their donations. Toys that appears broken or dirty, or which have missing pieces, are discarded. As well, stained or torn clothing is recycled. Margherio says that they are constantly upgrading and improving their systems because better systems equal greater impact. Thus far, Cradles to Crayons has expanded from Boston into Philadelphia and Chicago, but the need is so great, Margherio says they can’t stop there. Another derivative of great systems is that it makes it easier to spread their message and to recruit additional volunteers. For example, a recent upgrade to their Giving Factory is braille embedded labels in bins which allows for blind volunteers to offer their time and talent to the mission.

Building a Movement: Margherio says that in addition to creating change for communities in need, she is also very excited about the impact that Cradles to Crayons is making through their leadership training for middle school and high school students. The program, which they offer three times a year, teaches students how to create a movement within their communities. Students that participate learn how to create a pitch and to build and execute a plan within their community to make an impact for low income families. Margherio says that it is inspiring to watch young adults come through the doors with passion, perseverance, and a burning desire to make a difference. She says many of these youth take the skills learned in their program out into their communities to help all different organizations, and many keep coming back to Cradles to Crayons to lead volunteer groups, build community partnerships, and to design new and different programs to make a greater impact. Margherio says that the original mission was to create efficiencies by matching people who have extra with people who need, but in doing so they’ve created other efficiencies, like helping schools create better young community leaders. 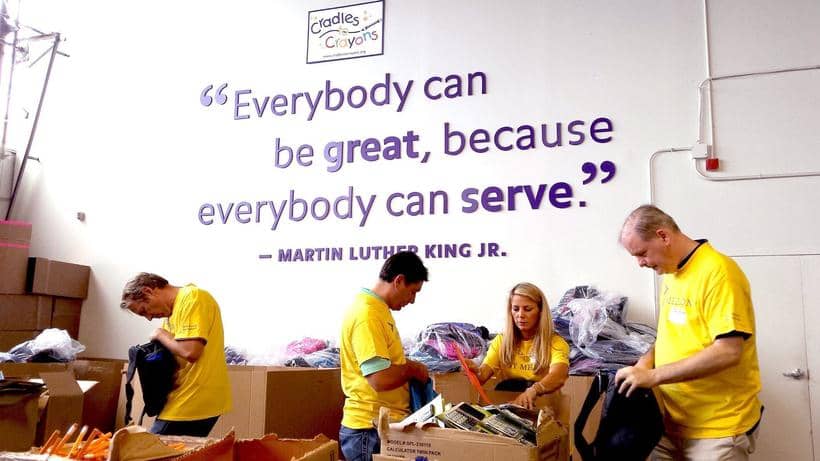 Mentors: According to Margherio, the success of Cradles to Crayons would not have been possible without the help of mentors. She says her mom and dad were her original mentors. Her mom has always been committed to community service and her dad, a physician, was constantly testing new and better business models for his practice. She says that she learned a great deal by simply observing them. She says her board members have also served as mentors, offering assistance and guidance on everything from business strategy to important introductions that have resulted in significant corporate partnerships with companies like Bank of America, Blue Cross Blue Shield, Bain Capital and Staples. Margherio says that she seeks guidance and advice constantly in her business, because if there’s a better way to do things, she is all ears, because her job is to create greater impact for families in need.

At the end of the day, Margherio says her success has everything to do with the fact that it feels good to give back. She says that it’s human nature to want to help others. So, she says her job is quite simply to find out what families need so that she can offer people the opportunity to feel good by helping. She is Lynn Margherio, founder and CEO of Cradles to Crayons.