Join Us to End Clothing Insecurity

More than 20 million children in the United States are currently growing up without basic essentials like clothing, shoes, diapers, and school supplies.

Hosted by Founder and CEO Lynn Margherio at the Cradles to Crayons Philadelphia Giving Factory, October 4, 2022

Inadequate access to diapers can have detrimental health and development impacts on infants and toddlers. It is also a significant factor for caregivers who rely on child care missing work. While this pervasive crisis continues to impact millions of American families, there are also solutions to mitigating this reality.

What is Clothing Insecurity?

Cradles to Crayons defines Clothing Insecurity as the lack of access to affordable, adequate, appropriate clothing. Families facing clothing insecurity may have some clothing and shoes, however, they may not fit properly, be in wearable condition, or be seasonally appropriate for the weather. Additionally, clothing insecure families may not know where their clothing resources will come from or what kinds of financial tradeoffs they will need to make to fulfill them.

With supporters across the United States, Cradles to Crayons works to fight Children’s Clothing Insecurity directly in Chicagoland, Greater Philadelphia, Massachusetts, NYC, and online through Giving Factory Direct. We focus nationally on raising awareness of this urgent crisis and advocate for further-reaching and sustainable solutions to address the need. In 20 years, we have supplied more than three million packages of basic essentials like clothing, shoes, diapers, and school supplies to children who don’t have access to these critical resources. 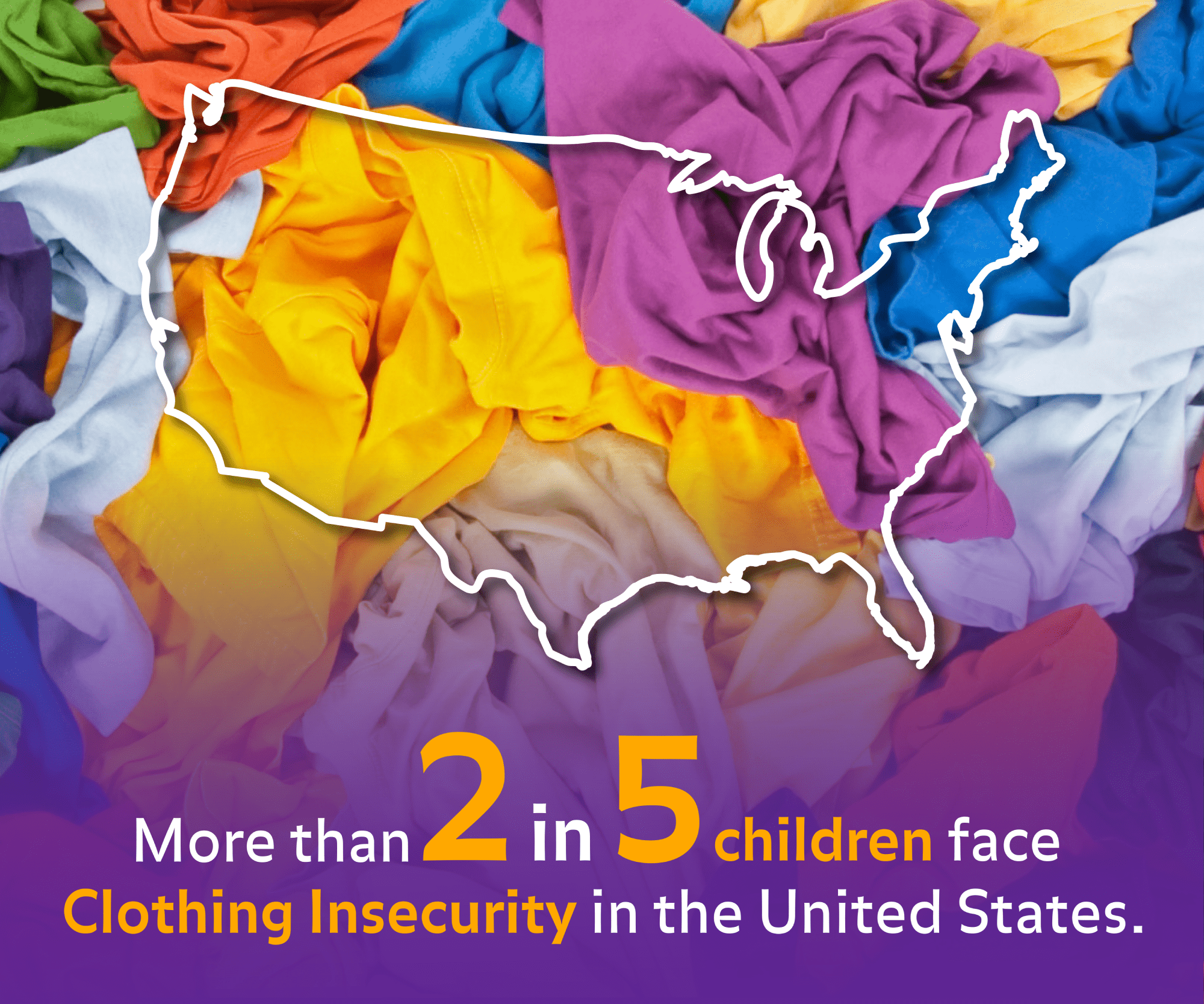 The need is urgent.
The time is now.

2 in 5 American kids are unable to adequately dress themselves every day.

The data is there: This is an alarming reality for today’s children.

We know that families struggling to pay for rent and groceries frequently cannot afford many basic items for their children like properly fitting outfits, diapers, or a backpack and school supplies. There is no significant state or federal support for children’s clothing. 85% of the Partners we work with would not be able to provide their families and children with no-cost clothing resources without us.

Help Us Tell this Story

Clothing Insecurity is not new, but the need to tell the story is. Without the visibility that other insecurities like food or housing have, the significance of this problem stays hidden. As Cradles to Crayons expands our national effort to elevate the urgency of the need, we want to hear from you.

How has Clothing Insecurity impacted you, your family, your community? What happens when growing children go without basics like clothing, diapers, and shoes? Why are clothing resources so difficult to secure? Tell us, so we can help change things. 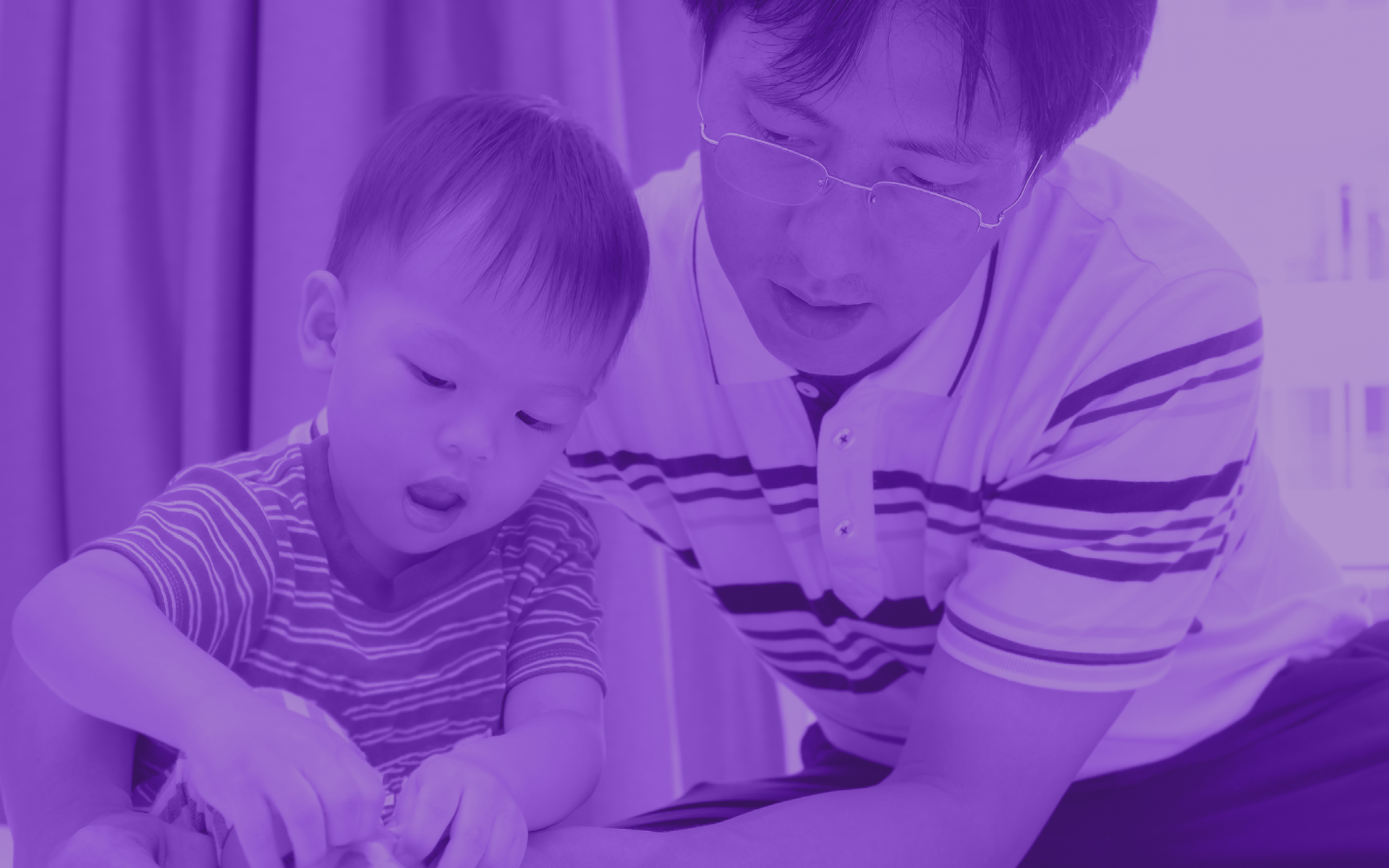 When Founder and CEO Lynn Margherio saw that her niece Elise had clothing to share and decided to do something about it, she couldn’t have imagined the passion and power that would come together to support children and families. 20 years later, here we are.

On May 4, 2022, we launched our 20th Anniversary year with a kick-off event full of memories and reflections. Watch the event recording to learn more about our history, the people who have gotten us here, and the commitment to a future where all kids have what they need to thrive. Have your own Cradles to Crayons story? Tell us!

Help raise #EndClothingInsecurity visibility and support Cradles to Crayons with a limited edition 20th Anniversary shirt! A percentage of proceeds will be donated for every purchase.

On June 1, 2022, we honored Hildebrand Family Self-Help Center as the 2022 Recipient of the 5th Annual Cradles to Crayons® Chairman’s Council Impact Award!

The Chairman’s Council Impact Award recognizes a Service Partner organization that demonstrates excellence in collaboration with Cradles to Crayons and furthers our shared mission to provide children with the Everyday Essentials they need to thrive. The award includes an accompanying grant to strengthen the Service Partner’s organization and programming to increase our collective impact.

Hear about the incredible work to expand their Resource Center program for clients by supporting more consistent and customized interactions with children and families in shelter, ensuring the 200+ families they work with are supported with the Everyday Essentials, like clothing, to be prepared for all situations. 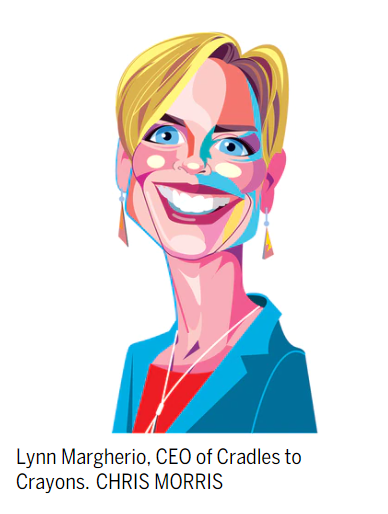 For Cradles to Crayons founder Lynn Margherio, the “pandemic pivot” her nonprofit made could end up serving as a model for a nationwide expansion.

The Newton-based nonprofit kicked off its 20th-anniversary celebration last week with a virtual event, featuring supporters such as Bruins star Patrice Bergeron and author Peter Reynolds. It has come a long way from when Margherio started collecting donations of new and gently used clothing and backpacks for kids out of a consulting office in Quincy. Today, the organization has a $13 million budget, 90 employees, and warehouses (aka “Giving Factories”) in Chicago and Philadelphia as well as the one in Newtonville.

What could end up being the biggest change came about partly because of COVID-19. Margherio was about to sign a lease for a fourth warehouse, to serve the New York City market, when the coronavirus forced her to rethink the physical model and explore a digital expansion. Eventually, she developed a new online platform called “Giving Factory Direct” that enables people to match with a specific child in need and ship items directly to a social service provider that can deliver the items. That effort launched last year, to serve New York, and has since collected donations from 32 states. Margherio expects to serve additional cities this year. She estimates roughly 20 million kids across the United States suffer from “clothing insecurity.” “That’s a big lift,” she said. “Kids are [often] outgrowing clothes a couple times a year.”

Many companies have both brick-and-mortar and digital arms. The same is now true of Cradles to Crayons.

“We are very hopeful that we’ll be able to scale up Giving Factory Direct to serve kids across the country,” Margherio said.

The physical locations will remain important, in part by providing a volunteer option for employers and their workforces. The number of local companies with volunteers who have sorted through packages or helped in other ways is too long to list, but some notable ones include retail giant TJX Cos., law firm Foley Hoag, consultancy Bain & Co., and Bank of America.

The former business consultant knew she was on to something 19 years ago, the first time she wandered into her then-new warehouse in Quincy — her office landlord told her to get a new space for all that stuff — and saw a roomful of volunteers she didn’t recognize. Margherio said, “That was when I realized the power of volunteerism to drive our mission.”

ending clothing insecurity: Cradles to Crayons by the numbers

You can get involved with Cradles to Crayons and support children directly in a number of ways! Volunteer with your family, friends, community group, or company at any of our Giving Factories. Sign up for Giving Factory Direct to match with a child and ship clothing directly to them. Give a financial gift to help us expand our work to #endclothinginsecurity.

Straight from your home to a child in need—our innovative new platform makes it easy to pack and ship the clothing you have to donate directly to a child with those needs! Sign up to expand our reach to even more kids across the United States.

We work with tens of thousands of families, individuals, community groups, and corporate volunteers in our Giving Factories® and at community-based events to provide more than 500,000 packages of essential items to children every year. Join us to help in your community!

Learn How You Can Help

Drop Off Donations in Chicagoland, Greater Philadelphia, and Massachusetts